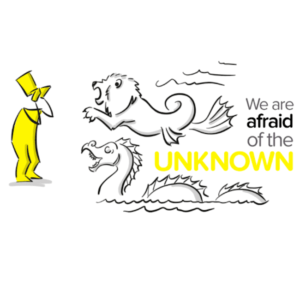 There is nothing that causes more discomfort in people than uncertainty, and this applies to company leaders and the companies they lead. As D’Souza states in this interview:

We’re hardwired to know, and neuroscience even points to the part of the brain called ‘interpreter’. When there is no meaning, it seeks, automatically, patterns for recognition … uncertainty has a physical impact as much as an emotional impact of feeling threatened or feeling endangered

So what does a leader, and by extension a company, the people within the company, and all of the other stakeholders of the company do in an increasingly VUCA (Volatile, Uncertain, Complex and Ambiguous) world?  D’Souza argues for reframing the problem as one of dealing with the ‘unknown’.

If we are able to look at the unknown at a different way, to reframe our ability to be with the unknown, … if we can grasp the benefits of engaging with the unknown rather than what we already know, … that’s really looking at (the unknown) as a place of opportunity for something new to emerge in, in the business world, and in context of living in the VUCA environment

It’s questionable that ‘reframing’ uncertainty as the ability to deal with the unknown is the key to resolving the underlying conundrum, but the key point being made is that a leader can be very uncertain about the specific end-point of a journey they embark upon and, at the same time, very certain of their and the company’s ability to deal with uncertainty and that they will end up with a good outcome. This approach to uncertainty and the unknown is exemplified by Jeff Bezos who has written on this very topic.

The interview is worth reading (or listening to) for ideas on how to approach the issue of talking about and dealing with uncertainty. The discussion about ‘decent doubt’ and ‘the beginners mind’ as well as the list of typical, instinctive reactions companies have to uncertainty is worth keeping in mind.

The ability to deal with uncertainty is critical in an increasingly VUCA world. Those companies that develop this competency will be able to differentiate themselves from companies who continue to ignore uncertainty and keep pretending to know that what they are doing is exactly the right thing.

May 14, 2018 Article
Get Real About Your Company’s Future