… flows of ideas are central to understanding society not only because timely information is critical to efficient systems but, more important, because the spread and combination of new ideas is what drives behavior change and innovation.”
— Alex Pentland

In his book, Social Physics, Alex Pentland collects, codifies and enhances the science of social dynamics and communication. He defines Social Physics as “… a quantitative social science that describes reliable, mathematical connections between information and idea flow on the one hand and people’s behavior on the other.”

Pentland’s core hypothesis is that idea flow, of the right type, enhances innovation, creativity, social well-being and even the functioning of governments. The “right” type of idea flow is a flow that occupies a sweet spot between isolation (i.e. no external idea flow) and “echo chamber” (i.e. similar ideas shared only within a like-minded community). It is in this sweet spot where people are advancing their ideas, building on others’ ideas and challenging existing ideas, he argues, that the most creativity occurs. Where Pentland is strongest in his research and writing is in how to foster such an environment, a question that should concern any corporation or individual who is trying to innovate.

One item of note is that Pentland’s definition of an ‘idea’ is somewhat at odds with a ‘standard’ conception of what an idea is. He defines an idea as

… a strategy (an action, outcome and features that identify when to apply that action) for instrumental behavior.

Although he is consistent in his use of this definition it often leads to some strange formulations. The book also suffers from a high degree of self-promotion, and the egocentric writing style can be off-putting. Especially egregious is the presentation of foundational knowledge as if it were new. People have been looking at the social network effects of influence since 1969, when Frank Bass created the Bass diffusion model based, in part, on the work by Everett Rogers on the diffusion of innovation. Pentland’s oversight in acknowledging this rich history is a disappointment and results in it being difficult for the reader to place his work within a larger context.

Despite its flaws, the book provides interesting and valuable insights into the effects of social influence and dynamics that are only becoming more powerful in today’s connected world. 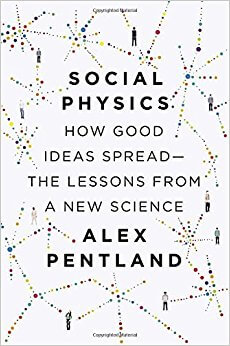