Gary Klein is a psychologist who became interested in how people gain insights – those “aha” moments when a sudden realization causes a change in perspective and consequent decisions and behavior. How people form insights, Klein claims, is both under studied and mis-studied, and he sets out to rectify the situation in this book, with mixed success.

Insights are important. They are a natural part of the human experience and the source of creativity and breakthroughs. They are how we develop new patterns that change the way we think, act, perceive, feel and desire. They cannot be forced or planned.

In Klein’s model of improving organizational performance, increasing insights is half of the equation (the other half is reducing errors). A well-formed, complete, accurate and actionable model of insight formation would clearly be of great benefit to both individuals and organizations.

As Klein was collecting stories about insights, he noticed that many, if not most, of the stories did not fit the prevailing model, established in 1926 through seminal work by Graham Wallace. Wallace outlined four stages of insight: preparation, incubation, illumination and validation.
Klein also noticed that experiments to study insight had used artificial environments in which the experimental design assumed Wallace’s four-stage model.
Using a strictly empirical methodology of collecting stories and finding patterns, Klein came up with a “Triple Path” model of insight.

Once Klein introduces his model, he spends a lot of time explaining each of the paths using the various stories he has collected. Some of these are interesting, but it might have been more illuminating to get at the underlying mechanisms of insight. Many of the stories are seemingly trivial (e.g. he relates how his daughter had an insight about how to “game” her fantasy league so she could win). Yes, insights can be small and mundane or big and society-changing (e.g. Watson and Crick’s insight of the double helix), but isn’t the latter what we really want to understand?

Klein concludes that insights are mainly about challenging, overcoming and throwing away false, misleading or limiting assumptions. The true breakthroughs come when an unexpected shift in perspective realigns the assumptions we have been operating under. This happens, according to Klein when we
1.       Escape flawed beliefs
2.       Gain experience
3.       Take an active stance
4.       Utilize playful reasoning

Klein describes these activities through his stories, but he offers no specific recommendations about how to master them. He advocates cultivating an insight stance but, as he readily admits, more study is needed.

Despite its flaws, “Seeing What Others Don’t” is a valuable book for those who believe that insights are important and that there’s value in finding a way to increase them. The Triple Path model is an important contribution to insight research and provides a foundation to build on. 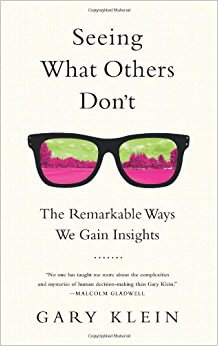