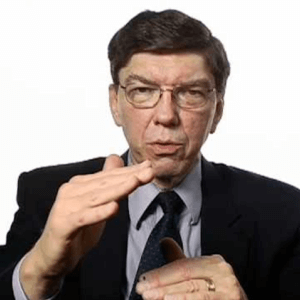 The first time I saw Clayton Christensen speak was at the Front End of Innovation conference in the early 2000’s. I had read ‘The Innovator’s Dilemma’ when it was published and it was one of the inspirations for the new innovation consulting business I started in 2000. It was the first time I heard the ‘milkshake story’ (I would hear and read it many more times over the next 20 years) and I was struck by the clarity and precision of his talk. This was a storyteller who could explain a new and interesting concept in a way that anyone could understand and apply to their life and work.

The Innovator’s Dilemma is the book that launched a new discipline and thousands of new research threads and new careers. It established innovation as a ‘thing’ that could and should be studied, modeled, theorized about, and ultimately developed into new processes, methods and tools that companies could use to do innovation better. He inspired many of us to think about innovation in a new way and, as a result, we built upon and extended his seminal model and challenged aspects of it in interesting and fruitful ways.

In the business world, Clayton Christensen is defined by two key concepts that dominated his work – Jobs-To-Be-Done (JTBD) as illustrated by the milkshake story, and Disruption (specifically disruption from below) as written about in The Innovator’s Dilemma.

JTBD is inspired by another Harvard professor, Theodore Levitt, who, in 1959, had the original concept that all subsequent JTBD concepts came from – “People don’t want to buy a quarter-inch drill. They want a quarter-inch hole!”. Christensen took this concept, built on it, and it occupied a large portion of Christensen’s commercial influence through a company he co-founded (Innosight) and another company founded by a student of his (Strategyn).

His other, and more important, key insight was described in The Innovators Dilemma. On the surface, the book is about disruption “from below”. The concept that large, established companies can be disrupted because they focus on their best customers (as they need to be) while ignoring new companies entering the market with lower performing products at lower price points. Eventually these new entrants improve at a faster rate and eventually take over. (Read this article for a good summary of Christensen’s disruption theory.)

On the most fundamental level, the book is about the nature of large, successful companies. The very nature of their success means they are ill-suited to adapt when the world changes. This manifests in many ways, one of which Christensen captured with his “disruption from below” theory.

It is ironic that Steve Jobs was a fan of Christensen and his disruption theory. The iPhone disrupted its industry, but it disrupted it from above. The iPhone was a high-end, mega-featured product aimed directly at what a customer desired that they didn’t even realize they had! Christensen made some bad predictions (and investment decisions) based on his theory – including one in Apple itself.

This example, and many others, illustrates that aspects of disruption are not captured by the initial theory put forth in The Innovator’s Dilemma. Christensen inspired the initial concept, but subsequent thinking has led to the evolution and expansion of his theory. He frequently argued against these developments.

Like any pioneer who establishes a new discipline, Christensen had supporters and detractors (see this article by Jill LaPore and the response by Thomas Thurston). It is the fate of any pioneer to be disbelieved, contradicted and ultimately refined and improved upon. One of the marks of a pioneer is how they react to the inevitable purloinment and modification of their ideas. In later years he argued that people were misusing and misunderstanding disruption including a rather bizarre argument that Uber isn’t really disruptive. While perhaps technically true, given his narrow definition of disruption, his argument ignored that the definition of disruption had by then escaped his own narrow definition (see ‘Set Disruption Free Dr. Christensen’).

The argument with Christensen’s disruption theory was never over legitimacy, it was over universality. What Steve Jobs saw in Christensen’s work was not only the value of JTBD thinking but more importantly the true essence of disruption and the difficulty that entrenched dominant firms have in responding to it.

This true essence of ‘disruption theory’ is that, in the face of new challenges to existing businesses, established companies almost never respond well. It’s not that they don’t see what is happening, it’s because they are constrained by their current businesses and the culture, behaviors and processes needed to be operationally excellent. This revelation of will be Christensen’s lasting legacy and his insight has spawned a multitude of subsequent efforts to address this.

Christensen had many other powerful insights and opinions such as his view of the future of MBA education, how to disrupt the healthcare system, the pernicious role of metrics such as ROIC and his most personal, How Will You Measure Your Life. All are worth reading and reflecting on.

Clayton Christensen, a genuinely nice person and inspiring intellect, had much more to contribute and he left too early. All of us who are passionate about and practice innovation are thankful for his insights and the inspiration he gave us to follow this innovation ‘thing’. He will be missed.

For a couple of other thoughtful remembrances, see these by Steve Blank and Kara Swisher.

April 26, 2016 Article
From Pipelines to Portfolios to Platforms

May 15, 2018 Article
Maybe This Is as Good as Innovation Gets