This following is an excerpt from one chapter in a book being published in fall 2020 by the  Global Innovation Institute (GinI). The working title of the book is ‘The Other Side of Growth: Questions We Should Be Asking About Innovation’. It will focus on the many ways besides revenue and profits that innovation can and should create value for individuals, companies and societies.

Every innovator has, as one of their motivations, the desire to have positive impact in the world. But, in addition to the positive effects that innovations have on their customers and society, they often have unexpected and unintended consequences. This includes being co-opted by their own company, their customers or their competitors that adhere to the Friedman doctrine that the only responsibility companies have is to maximize shareholder profits.

The choices of companies, the innovations they pursue and the effects on society are all connected. As innovators, the question is how we can influence the balance between profits and a deeper purpose that’s needed in today’s world?

There are two compelling forces that overtake the good intentions of an innovator and result in an innovator’s loss of control.

The effect of this is that the locus of making sure the innovation is creating both economic value and social good, the ostensible motivations of a purpose-driven company, becomes widely dispersed and no longer resides solely within the innovator’s or the company’s direct control or influence.

Even within a company, innovators lose control over how their innovation will be scaled. This inevitably occurs in organizations large and small when an innovation is taken over by an existing business or the company puts a business executive in charge of scaling. If the company still answers to the Friedman doctrine, the innovation will inevitably be co-opted to generate the maximum possible near-term revenue and profits.

In addition to internal loss of control, innovators, and the companies they are a part of, lose more control once the innovation is out in the world. Other things happen that are not only beyond the innovator’s control but are beyond the company’s as well. These can have future consequences that are unintended and unexpected. The unintended consequences of globally adopted social media, facial recognition, and ever-present AI are just a few examples playing out now.

The Social Model Canvas – A Tool for the Purpose-driven Innovator

If innovators are to have an influence on purpose-driven outcomes, they need tools to lead a company in its purpose-driven strategy.  Among the methods and tools to help with this is an expansion of the Business Model Canvas [[1]] to turn it into a Social Model Canvas. 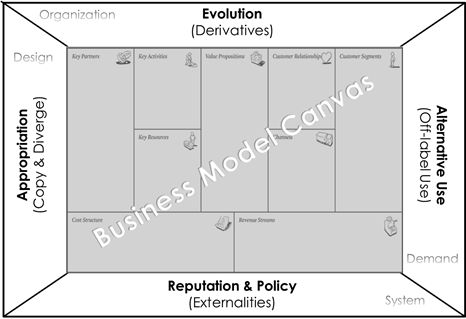 The Social Model Canvas is constructed as an enhancement of the Business Model Canvas with an additional layer that expands the canvas to illuminate the primary, secondary and tertiary effects of an innovation along four distinct dimensions. It is designed to promote the imagining of alternate futures, both good and bad. It broadens the context for the innovation being considered and extends the timeframe beyond what is normally considered.

By using the Social Model Canvas, an innovator can make potential future consequences visible to all parties, inside and outside the company, who have an stake in the long-term outcomes. Doing this can help a company abide by a purpose-driven mission.

The Social Model Canvas does all this by guiding the innovator to consider each of the following.

After an innovation is introduced into the world, its evolution involves all the subsequent updates, modifications, releases, and derivative offerings a company does to expand its initial scope.  This results in multiple, branching trajectories that, over time, create a highly branching, dense tree of products, services and business models. This branching tree of future trajectories can be thoughtfully anticipated, not by figuring out all future paths and possibilities are predicted, but by looking ahead at plausible trajectories. In this way, an innovator can not only gain insight into future business possibilities, they can also see places where the societal well-being outcomes could possibly go awry.

Companies are almost always surprised at the unexpected uses discovered by their customers.  Instead of waiting, observing, and being surprised, the innovator can and should anticipate alternative uses and how the company should and could influence these them

It is inevitable that, no matter your IP position, others will appropriate, to one degree or another, any new innovation introduced into the market.  This appropriation will be done by other enterprises that do not necessarily have the same purpose-driven motivations or ideas about social well-being as the company that introduces the innovation.  It is up to the innovator to think about how others will appropriate the new concepts and use them to their own ends and how the company can control or influence how the concept and its underlying technology is used.

The triple forces of evolution, alternative use, and appropriation create reactions from societies and governments. These reinforcing and balancing feedforward and feedback loops determine future reputation and regulation. This is a complex, dynamic system and must be thought of in this way.

The unintended effects of an innovation will eventually be responded to through social reputation and government policy and regulation. This creates an imperative for an innovator to be a social and policy futurist and advocate.  This may require the innovator, and their company, to go against the natural, immediate instinct of the company at times and to advocate for things that may impact maximum growth and profits in the short term but which will ultimately result in a better, long-term outcome for society.

To move into the realm of purpose-driven innovation, an innovator, and the company they are part of, must.

The Social Model Canvas (among other methods and tools) can help the innovator accomplish these things but most of all it will take a change in mindset on the part of the innovator and the company they are part of to realize that their social responsibility extends far beyond the products and services they build.