“The value of an idea lies in the using of it.”

“You don’t learn to walk by following rules. You learn by doing and falling over.”

“If you are not embarrassed by the first version of your product, you’ve launched too late.”

Recently, a multi-billion dollar, international company looked at their innovation portfolio and realized that all it contained were opportunities totally aligned with (and supported by) its existing business units.

There were virtually no active projects for strategic opportunities that would expand their business beyond the area close to their core, and consequently no new offerings that they could rely on for accelerated future growth. When they examined the reasons why this was so, they determined that the only way to create new offerings was their tried-and-true New Product Development (NPD) process based on the stage-gate methodology introduced by Cooper in 1986. In digging further, they came to the realization that it was the stage-gate process itself (even with the new agile stage-gate modifications) that was the limiting factor. The linear nature of the process (even with constant customer iterations), the lack of system-level iteration and feedback, and the deterministic control mechanisms all conspired to make it difficult for any opportunity that wasn’t well within, or at least very close to the core, to even make it into the NPD process – much less succeed if it did. It was clear that a new methodology was needed.

A Definition of Incubation (from an Innovation Perspective)

For a company to successfully implement opportunities that stretch its strategic boundaries, there needs to be room to experiment in a non-deterministic, non-linear way. There needs to be a way, not only to tweak the design of a new opportunity, but also to challenge and reshape its underlying value proposition and business case throughout the process. For strategic innovations to be successfully pursued by a company, there needs to be an iterative cycle of experimentation – testing, learning, adapting, and testing again – until you get it right (or abandon it!). This period of experimentation requires a certain mindset, specific behaviors, a methodology that includes the appropriate tools, and a guide that can be used to check if you are on the right path. This is what is called ‘incubation’.

Incubation is the period between having a well-reasoned concept and an actual artifact (product, service, platform, business model, etc.) that can thrive in the world. The reason for having an incubation period (during which you are incubating a new opportunity) is to design and conduct experiments (and use the results) to get as close to a true, valuable manifestation of a new artifact as possible.

Sometimes new product development (NPD) is relatively straightforward, although it may be extremely costly and difficult. If uncertainty is low and the new artifact is relatively close to the company’s core, the NPD processes that companies use (such as stage-gate) are pretty good at producing a continuous stream of sustaining innovations. Incubation isn’t even an issue – just develop it! Today, however, sticking close to the core is just table stakes. Doing so will keep you alive, but it will also keep you penned into an increasingly smaller corner of the universe of possibilities.

Sometimes, though, incubation is really hard. When there are high levels of uncertainty in many dimensions – because the new artifact has never been done before and because it will require new competencies and behaviors that are different from the company’s current expertise – success is often elusive. It is this latter condition that is of interest. It is a defining aspect of strategic innovations that stretch or transform existing businesses boundaries.

In today’s world, VUCA[2] is increasing at an accelerating pace. Within and near the core, that uncertainty can be managed (indeed the company itself may be the cause). Farther from the core, however, the causes are less familiar and the ways to address them are unknown. But the need to identify, define and implement new opportunities that are further from the core is increasing. This is where differential value can be created and where accelerated growth is possible.

Incubation in Startups and in Large Companies

Although there are many ways that incubation in large companies and startups are similar, there are some significant differences that have bedeviled those that have tried to apply startup approaches to large companies. Even the labels used – “Entrepreneur” in a startup and “Intrapreneur” in a company –  indicate there is a meaningful difference. Large companies suffer from the legacy forces of culture, context and commitment that slow decision making, cause them to shy away from uncertainty, and that set expectations of guaranteed success.

A framework for incubation in large companies must take these differences into account and take advantage of a large company’s strengths to mitigate its weaknesses. To do this, a framework needs to be supported by the appropriate organizational structures. This usually involves a separate and distinct Corporate Innovation Group (CIG) that can operate independently of existing business units.

A Theory and Model of Incubation for Large Companies

Today, two distinct and ‘comprehensive’ incubation frameworks[3] have emerged, both of which were initially driven by the specific needs of start-ups.

There are numerous other methods, tools and approaches (e.g., McGrath Learning Plans, Collins Flywheel, etc.) that address aspects of the incubation process but by far the most common approach to incubation used by most companies is decidedly ad hoc.

In looking at these efforts, four key dimensions of a comprehensive model of incubation emerge.

Both of the predominant incubation frameworks, as well as the many other approaches to various aspects of incubation, emphasize one or two of these components. Lean Startup, for example, focuses on the Process and Mechanisms while Effectuation emphasizes Mindset and Behavior. However, there does not seem to be a comprehensive framework that incorporates all these aspects.

What would such a framework look like? Since incubation is about learning through experimentation, it might be useful to lean on the bastion of learning and knowledge acquisition – the scientific method. The scientific method is a mindset and codified behaviors, a methodology along with techniques and tools to use, guided by a set of principles. All of this is implemented by specific experiments that have a purpose and a plan. It turns out that the scientific method matches up quite nicely with the objectives and tactics of incubation.

This framework explicitly acknowledges incubation as a means of experimentation that applies at both the macro scale (e.g., testing fundamental business assumptions), and the micro scale (e.g., testing specific design features). It can also apply to both large companies and startups because it allows for some customization in each of the four dimensions of the framework based on situational circumstances. It supports the iterative and recursive, non-linear and non-deterministic nature of learning while, at the same time, providing a means of determining how to move forward and when you are done.

The Incubation Framework in Practice

A complete innovation system includes Domaining, Discovery, Incubation, and Acceleration phases. In large companies it is the incubation phase that is most in need of the attention and skills of an intrapreneur. The other phases of the innovation system are accommodated by different methods and tools that companies must also learn how to do well. But it is the incubation phase that transitions a new opportunity from concept to reality at the very point in time where the opportunity is in its most fragile state and could easily become malformed or mistakenly terminated.

The following diagram depicts a complete incubation system based on the framework described above. The specific detailed descriptions of the components are not relevant at this level of representation but are listed here to give a sense of what is involved. 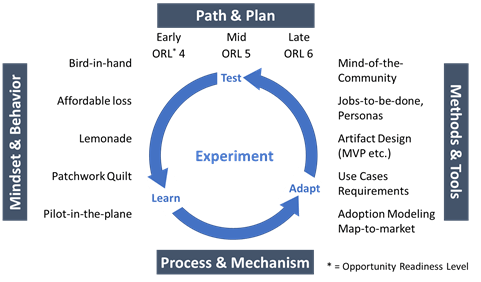 This incubation system must be embedded within an organization in the right way – with the appropriate network, governance and operational interfaces that will enable it to be effective.

Strategic innovations are those that stretch the company’s boundaries and have the potential to transform the company’s businesses. They require the company to develop new competencies and to behave differently than they have in the past. These innovations disrupt the company’s well-established business practices that have driven it to be operationally excellent in its industry. But these same business practices are the ones that stand in the way of more ambitious and bold initiatives – the initiatives that will ultimately drive long-term, accelerated growth.

Incubation is inherently complex. It is appropriate that this complexity is what enables a company to respond to an increasingly VUCA world. Without incubation, the means of experimenting with a new opportunity to learn what works and what does not doesn’t exist and the company will box itself into a corner and/or make increasingly frequent and costly mistakes.

But with complexity comes difficulty and effort. The types of experiments, and the planning of them, needs to be customized and adapted for the specific industry, company and type of opportunity. The incubation system needs to be embedded within the organization in the appropriate way and the company leadership must understand the long-term value of the effort. While this is difficult, the payoff is clear. It is the only, organic way to expand the company’s strategic boundaries and be the disruptor rather than the disrupted.

[1] Strategic innovations are those that are not routine or sustaining. They are ones that do not merely extend or adapt the company’s existing products and services, but instead stretch and transform a company and its ecosystem.

[2] VUCA stands for Volatility, Uncertainty, Complexity and Ambiguity. A brief discussion of VUCA can be found here.

[3] The Agile-Stage-Gate methodology advocated by Cooper is not considered an incubation methodology for the reasons stated above.