Innovation is a knowledge game, and the best innovators invariably have a richer supply of knowledge than the competition. But gaining that knowledge supply may be more a matter of disposition than behavior: You need to be genuinely curious. Or at least that’s the position that journalist Ian Leslie takes in his new book, “Curious: The Desire to Know and Why Your Future Depends On It.”

The human animal, Leslie says, has evolved a “Need for Cognition,” or NFC. It’s an appetite like any other, but it’s also not distributed evenly among a population. There are “cognitive misers” who seek comfort in what is already known, and others with a high NFC who seek new experiences beyond their routine. You may ask yourself, “Which am I?” Or perhaps, “Which is my company?” and Leslie likely would give you one answer: Any group “that values order will seek to suppress curiosity.” There may be a valid reason for that, he argues: Not all curiosity is productive.

Leslie casts curiosity into two buckets: (1) Diversive Curiosity, where the aim is novelty, and (2) Epistemic Curiosity, where the aim is knowledge. It’s the latter, he says, that makes the big difference. The power of learning, and building greater knowledge, is so substantial that scientists believe we have evolved to derive pleasure from it. The evidence lies in the levels of dopamine, a reward-motivated neurotransmitter, found in the brain during learning. But why should that be so?

We’ve all heard the saying, “curiosity killed the cat,” but ironically, curiosity is more likely to reduce risk rather than introduce it. In one famous study, people were shown a series of landscape pictures and asked which they preferred. Independent of background and culture, people were universally attracted to scenes showing a source of water, such as a river, lake or a waterfall. Water is a requirement for survival, hardwired over the millennia. But even more desirable were scenes showing “a path leading off into the distance, or dense foliage with a hint of a gap through which one could pass.” Leslie concludes that having other avenues to explore (or escape to!) may be as important to our survival as water is.

So how do we hone our curiosity and use it to thrive? Leslie offers many insights, ranging from how we raise our children to how we train ourselves. In all cases, however, he underscores the value that good curiosity plays in producing its principal side effect: knowledge.

“The more we know about something,” Leslie says, “the more intense our curiosity about what we don’t know.” Perhaps for that reason curiosity has been called the knowledge emotion.

So which comes first, which is more important to cultivate — curiosity or knowledge? Leslie concludes that “curiosity may be the single best predictor of success…it incorporates intelligence, persistence, and hunger” all in one. Every organization values knowledge (especially propriety knowledge), but what about the engine that builds it? How many companies cultivate their pool of curious individuals? Without them, the incurious organization is left to make due. They must base their innovation efforts on the public, consensus knowledge of others. I wonder why anyone would want to do that? 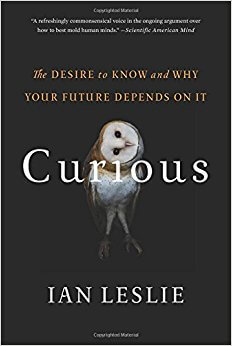